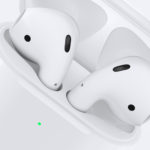 The news: A future version of Apple’s popular truly wireless headphones will include ambient light sensing (ALS) technology, according to DigiTimes.

Our take: With no screen for an ALS to adjust the brightness for, it clearly won’t be used for that on future AirPods. MacRumors found a second DigiTimes report suggesting it could be used to measure heart rate, and…I did some research and found this: the technology does actually exist! I’ve found heart rate monitoring on the Apple Watch to be spotty when doing something like running, so taking this measurement via the ears would be a solid workaround.