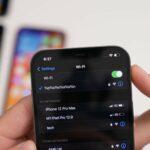 The news: Apple has fixed a somewhat serious bug that would completely disable networking capabilities on your iOS device, as spotted first by YouTuber Aaron Zollo.

Our take: Surprised it took Apple this long to correct the issue, which was relatively serious, but glad to see this ship alongside iOS 14.7. No idea when that update is coming, though, as it has been in beta testing for some time now…