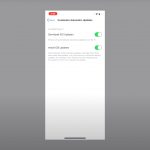 Our take: Although I’ve said this before, iOS 13.6 has to be the last iOS 13 update, right? I’m shocked that Apple is still putting so much time in effort into the 2019 release even now… especially with the iOS 14 beta cycle in full swing.