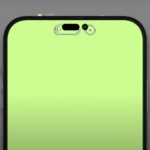 The rumor: Apple is implementing a larger set of front cutouts than previously expected, according to a new post on Weibo that has been verified by Jon Prosser (69% accurate, via FPT).

Sam’s take: I know the common take would be that this looks worse because it’s bigger…but there’s something about the scale now that actually looks more realistic to me. Probably because it is literally the components of the current notch but without the dead space. I still can’t believe they’re putting a literal i on the front of iPhone 14, but this is a slight improvement?