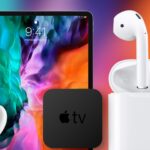 Ahead of Apple’s March 23 event, 4 new products are reportedly ready to ship

Ahead of Apple’s March 23 event, 4 new products are reportedly ready to ship

The rumor: Ahead of a rumored March 23 event, Jon Prosser (78.2% accurate) has shared a number of products that could launch at any time.

Our take: I think AirTags and a new iPad Pro will be announced on March 23 at an Apple event, with the possibility that an updated Apple TV makes an appearance, as well. Don’t think new AirPods are coming until April/May.